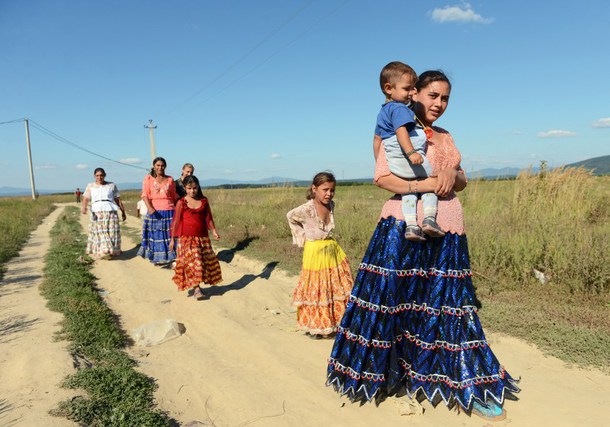 Disenfranchisement of Romani in the Republic of Georgia

Romani populations across Europe have long been and remain a targeted minority throughout history, and as such, disenfranchised from civil society.  The political and social upheaval, particularly in Europe and Eurasia during the first half of the twentieth century impacted Romani groups as well as other minorities.  This period also witnessed the fall of once great empires and the social-political infrastructure that accompanied them, most notably the Austro-Hungarian, Russian and Ottoman Empires. Like many others, Romani suffered through major turmoil such as the Holomodor (which forced many Romani to flee south from Ukraine and Moldova to Georgia), as well as the Holocaust and two world wars.  This same turmoil gave rise to new and dynamic supranational political frameworks, such as the European Steel and Coal Commission, which established the foundation of the EU.  Currently the EU is one of the primary benefactors of the Romani diaspora because it is one of the principal bodies actively creating and implementing policy aimed towards elevating Romani across EU member states.

With this historical trajectory in consideration, present circumstances of Romani today are briefly examined regarding their historical and political context.  This article will also look at the ways in which the EU is a benefactor of Romani minority rights, via its political and economic relationship with Georgia, as well as measures that Georgia initiates through its own volition.  Importantly, understanding the situation of Romani within the Soviet context, as well as explaining which groups the term Romani encompasses in the Republic of Georgia, is key to understanding the marginalization of Romani amid Soviet legacy.  For this reason, historical pathways of Romani groups in Georgia are addressed, followed by a summarized discussion of their situation in the aftermath of Soviet collapse in Georgia, and leading into the current era.

Romani in the Soviet Context

Many Georgian Romani are descended from those who immigrated to the region after territories of the Georgian kingdom were absorbed piecemeal into the Russian Empire beginning in the early 19th century.[1]  More Romani groups came to Georgia during the Holodomor in Ukraine and Moldova in the 1930s, as well as during WWII when many fled from southern Russia due to Nazi invasion.[2]  Figures from this period are vague despite the Soviet Union having included Romani in the census data from that period.   Romani either did not report for the census or if they did, obscured their identity.[3]  The occupation of many Romani before and during Soviet times was that of trade, just as is currently the case in Georgia today.  During the 1950s, Khrushchev mandated that Romani in the Soviet Union begin a sedentary life.  To this end, many Romani were given housing and identification documents.  While Romani retained their traditional occupation of trade, some also began working on collective farms.[4]  Additionally, and perhaps one of the starkest contrasts to the current era, is that Romani were part of the Soviet health care and educational infrastructure.[5]  Generally, this type of enfranchisement into a country’s social fabric lent itself to economic and social mobility.  However, with the collapse of the Soviet Union, and the disintegration of social, economic and political infrastructures that accompanied it, the situation for minorities became particularly difficult.   New citizenships were borne from the collapse of the Soviet Union and lack of education, occupational and social mobility led to a lack in citizenship, and thus access to any kind of social welfare.[6]  Meanwhile, newly independent political leadership in Georgia assumed a particular brand of national populism lead by Zviad Gamsakhurdia.  Running on a Georgian nationalist platform, Gamsakhurdia served as the first president of an independent and post-Soviet Georgia.  Gamsakhurdia’s nationalist fervor was already responsible for chauvinistic policies against the Ossets, and other minorities.  He was quoted as saying, “Georgia is in danger of absorption by other nationalities which were brought here by the Kremlin, by Russia, by the empire: Azeris, Armenians and even the Ossetians are newcomers here.  And the Georgian nation is in danger,” he declared. “We must save Georgia.”[7]  The historical bias against Romani that has been pervasive throughout Europe was no exception in this case and there were reports in some areas where Romani communities were attacked and disbanded.[8] Violent racism and severe economic conditions prompted some Romani to resettle in Russia.[9]  Without identification documents, access to basic services such as education, healthcare and the pension system is extremely difficult, if not impossible.[10]  The confluence of these lack of essential services is responsible for widespread illiteracy, unemployment, poverty, illness and early death among Romani groups in Georgia.

Today, organizations such as the European Centre for Minority Issues (ECMI), Public defenders of Office of Georgia and others work in cooperation in order to create a basic of level of civic enfranchisement.  First and foremost, this means providing identification documents and informing people about what social services are available and which offices to contact.[11]  However, this process is often painstakingly long, as several details about birth and time spent in Georgia need to be individually confirmed.[12]

Georgia, the EU and Minority Rights

Resulting in part from EU policy in the past few decades, and the legal basis to substantiate these policies, there are increasing initiatives to elevate Romani communities in the EU.[13]  Among the most prominent of these initiatives was the Roma Decade (2005-2015), a coalition of NGOs, supranational and national bodies committed to improving quality of life indicators among Romani.  These include “…priority areas of education, employment, health, and housing, and committed governments to take into account the other core issues of poverty, discrimination, and gender mainstreaming.”[14]  As a current extension of this, the European Commission elected to implement the EU Framework for National Roma Integration Strategies up to 2020.[15]  Notably, Georgia maintains an Association Agreement with the EU (signed in June 2014 and in effect from July 2016) as well as a Deep and Comprehensive Free Trade Area (DCFTA) and easier transit to and from the Schengen zone.  However, Georgia is not party to any of these EU backed initiatives despite having a visibly disenfranchised Romani minority population within its borders.[16]  There are only calls by the EU to change labor and human rights codes in Georgia but there are no serious mechanisms in place to hold the government accountable for this.  Additionally, there is awareness by both the Georgian government and EU that that there exists a tension between some minority rights, such as LGBTQI rights, and traditional religious values.[17]

According to the ECMI (European Centre for Minority Issues), in the Republic of Georgia Romani ethnic groups are categorized as follows “Roma, Lom, Bosha, Posha, Dom, Garachi, Karachi, Abdal.”[18]  These Romani groups are among many minority ethnicities in the Republic of Georgia and as of 2015, there were an estimated 1,500 Romani throughout the republic.  However, this number is considered low, because an accurate census is difficult to achieve due to many Roma newborns being born at home.[19]  Since 2008, the ECMI Caucasus began working specifically with the Romani population in Georgia and some gains have been made in settlements across the country.  For example, ECMI is responsible for helping some Romani obtain identification documents, further enabling people to find and utilize necessary resources.[20]

Following the civil war in Georgia in the early 1990s, there was an influx of international aid, mainly from the EU and U.S. This money significantly improved a war-torn economy.  Moreover, after the reforms instigated by the Rose revolution, the high degree of corruption that was pervasive throughout the Georgian government under Shevardnadze came to an end and direct foreign investment in the country increased.  While effects of this were seen in mainstream Georgian society, it did not reach minority groups already impoverished and disenfranchised by the Georgian government and at times, broader society.  As mentioned above, after signing an Association Agreement, the EU established firmer connections with Georgia. Further evidence of this can be seen in the years following the Association Agreement, for example the DCFTA was established, as well as freer movement to and from the Schengen zone.  Due to the fact that for the better part of two decades, the EU has developed and maintained substantial resources and policies devoted to the elevation of Roma, it is peculiar that there is no such strategic plan specifically for Romani in Georgia, especially when they remain one of the most impoverished and disenfranchised groups.

[13] European Commission. ‘EU Projects in Favour of the Roma Community.’ Publications Office of the European