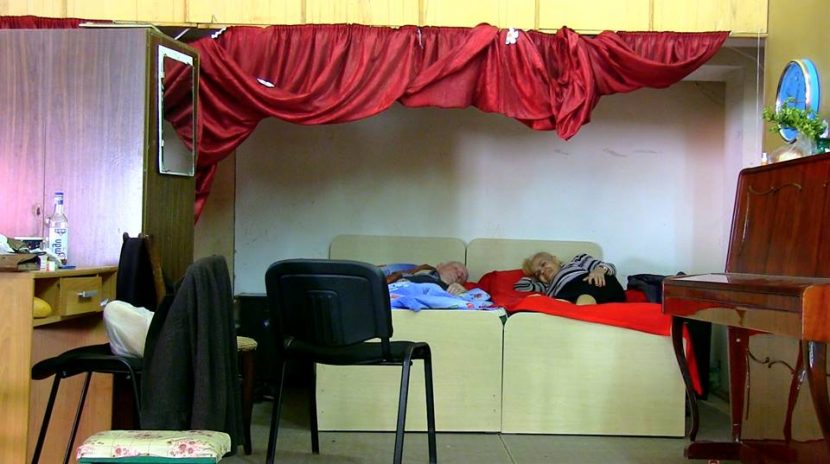 Film Screening in Kutaisi – On the Move

On the 4th of November at 17:300 Tsira Gvasalia’s documentary ON THE MOVE will be screened at Centre For Civic Engagment in Kutaisi.

Synopsis
Viola, Shota and Rima have to shelter a spare concert hall in the Tbilisi Boarding House of Elderly and live there together temporarily. Repair of the boarding house has commenced and has brought chaos, hassle and anger to the elderly, as they have to leave their rooms temporarily and share space with each other. Despite the big changes, four members of the boarding house find strength to continue following their life-time dreams. Shota, 90, builds a mini-church. Occasional meetings with her lover and a fear of losing memory keep 76-year-old Viola motivated every day. Former boxer Ushangi, 84, promises to continue exercising until “he is alive”. 69-year-old Pavle stays mysterious, while feeding birds in the house and knitting winter outfits to make money for his sister who has a cancer. His privacy is invaded when a car hits him in the street and boarding house administration looks for some money for his treatment.

Short Bio of the director
After completing her bachelor’s degree in English Language and Literature, Tsira Gvasalia pursued her MA degree in journalism and media management at Georgian Institute of Public Affairs [GIPA]. Her short documentary I’ll Tell You After I Die was screened at Tbilisi International Film Festival in 2009. Her current feature-length documentary On the Move was part of CineDOC Tbilisi 2016 edition at the Focus Caucasus competition.

The screening will be followed by a discussion with the director.