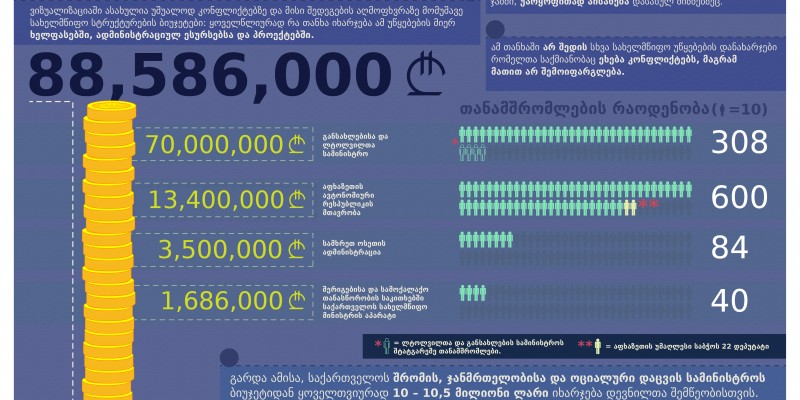 How much does the government of Georgia spend on conflicts?

There are far too many governmental structures working on the ethno-political conflicts. This had led to an obvious overlap of functions, complicated coordination and increased competition within these agencies. This, in turn, has a negative impact on the implementation of their objectives.

Visualization demonstrates the budgets of the organizations working on conflicts and the mitigation of their effects: annual spending on the conflicts by these agencies on salaries, administrative costs and projects. Annually spending of these organizations equal: 88.586.000 GEL

This sum does not include organizations whose work is not limited to the conflicts.

Additionally, each month up to 10.5 million GEL is spent for the Assistance for Internally Displaced Persons by the Ministry of Labor Health and Social Affairs of Georgia

Visualization was created in the frames of the project “Building a new Peace, Security and Stability architecture in South Caucasus” which is implemented with the financial assistance under UK’s Conflict, Stability and Security Fund. Content of the visualization was based on the article “The Conflicts and Georgian National Institutions: Time for Rethinking?!“.

The content of the visualization do not necessarily reflect the opinion of the British government.