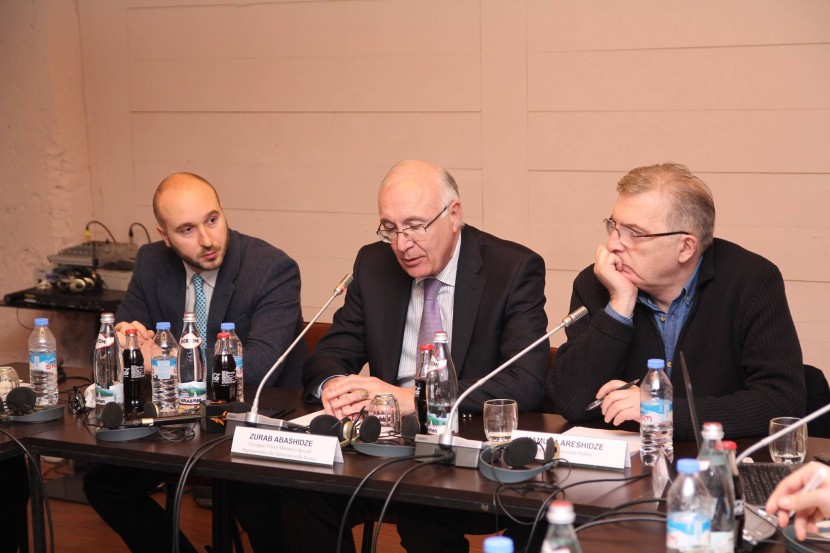 On March 23,  Caucasian house held a conference “New Vision of Diaspora  –  International Experience and Georgian Reality” in Rooms Hotel Tbilisi. The conference was organized in the framework of the project “Georgian-Russian Dialogue for Peace and Cooperation”, funded by British Embassy in Georgia.

The aim of the conference was sharing of the international diasporic experience and its promotion  regarding Georgian Diaspora in public-political spheres.  The conference was opened by the executive director of Caucasian House Giorgi Kanashvili alongside the representative of the British Embassy Tbilisi in Georgia Sopho Berishvili. Giorgi Kanashvili introduced the content of the project and emphasized the importance of paying attention to large Georgian Diaspora in Russia.  Sopho  Berishvili  talked  about  the  general directions and priorities of Conflict, Stability and Security Fund of British Embassy.

The  first  session  included  the  discussion  of  concrete  countries’  diasporic  experience  by Armenian,  Israeli and Ukrainian experts  and  academics, who focused on characteristics and development  of  diasporic  network,  the  possibility  of  diasporas’  contribution  to  the  social-economic development and how effectively counties with strong diasporas use those resources.

State  Minister  of  Georgia  for  Diaspora  Issues,  Gela  Dumabdze  talked  about  the contemporary approach of government of Georgia toward Georgian Diaspora.  The minister also mentioned that in this direction the work is in the process of rapid development and the interest from Georgian Diaspora’s side is growing as well.

The second part of the conference was dedicated to the Georgian Diaspora living in Russia which is the biggest Georgian community living abroad. The speakers of the panel were Zurab Abashidze, the Prime Minister’s Special Envoy in Relations with Russia and Boris Berulava, the representative of Georgian diasporic organization “Iveria”.  Zurab Abashidze, during his speech, emphasized the possible ways of incorporating Georgian Diaspora in the normalization of Georgian-Russian relations, though at the first stage Georgian Diaspora itself should be strengthened on the ground. As for the Boris Berulava, he spoke about the history of establishment of Georgian diasporic organization “Iveria” in St. Petersburg, its activities and underlined the importance of participation of Georgian side in their work.

Mariam Gachechiladze, the researcher at Caucasian House made the presentation of main findings of the research done by Caucasian House. The research was conducted in the frames of the project “Georgian-Russian Dialogue for Peace and Cooperation” and its main aim was to identify how strong the Georgian Diaspora organizations are in Russia, how they manage to cooperate and what main problems they are facing during their work. According to the results of the research Georgian Diaspora in Russia has some tangible influence on Georgia; mainly on economy of Georgia (money transfers).  Finally, as Georgian Diaspora doesn’t have institutionally established forms of network it should be enhanced by Georgia.