Social movements have been an indispensable component of the XX century and have even increased their importance in the XXI. Starting as initiatives targeting crucial shortcomings of the given period (women’s rights, segregation, war campaigns etc.) at the turn of the century they transformed into bearers of radical political change in countries such as the former Yugoslavia, Georgia, Tunisia, Egypt etc. Taking into account their gradual infiltration into all the countries in South Caucasus [1] it seems essential to examine their genesis and find out whether there are any possible common denominators usable for some regional constructions.

The term itself has a variety of definitions. For instance, Resource Mobilization Theory suggests that a social movement is “a set of opinions and beliefs in a population which represents preferences for changing some elements of the social structure and/or reward distribution of a society” (McCarthy and Zald 1977, 1217–1218). A more recent approach considers the SM-s as “a series of contentious performances, displays and campaigns by which ordinary people make collective claims on others” (Tilly, 2004, 3) while others critique RMT for attaching insufficient importance to the social/cultural components of SM-s, considered to be vital for post-cold war realities and refer to SM-s as “collective challenges by people with common purposes and solidarity in sustained interaction with elites, opponents and authorities” (Tarrow, 1998).

In order not to deviate from the main subject into theoretical debris, we will follow 2 SM classification models, suggested by Anthony Giddens and David F. Aberle.
Giddens classifies SM-s by their societal “location” and marks out 4 areas, where SM’s function [2]:

Aberle, in turn, brings into focus the “functional” facet of SMs, and identifies 4 types of them [3]: 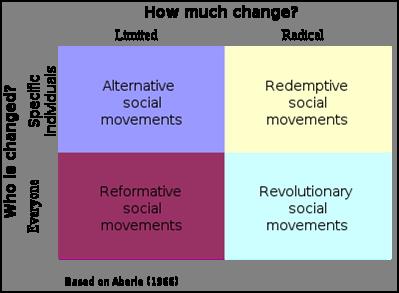 The above mentioned classifications will be used to reveal a) dominant SM types in the given countries, b) possible common grounds among them.

The first social movements in Armenia (”SAVE Cinema Moscow Open-Air Hall” [4], “We are against the reopening of foreign language schools in Armenia” [5]) started in the late 2000s and addressed concrete issues: the former was against the demolition of the open-air hall near Moscow cinema, while the latter was opposed to Parliament’s draft change in the law regarding language and public education, which provided for open foreign language schools. Afterwards, SM-s were fuelled by the protest energy accumulated during the 2008 presidential elections and particularly by post-electoral unrest. The main trend of Armenian social movements of that time was environmental and urban issues in Yerevan, which included capital construction in public areas, reduction of green spaces etc. (one of the most successful social movements in that sphere is still active “We are the Owners of the City” civic initiative [6], also notable Occupy Mashtots Park Yerevan [7]). Another significant trend of the recent period has been the struggle against certain mining projects that constitute a large-scale menace against the local environment (Save Teghut forest [8], Amulsar Gold-Mine Must Not be Exploited [9] etc.).

During the past 2 years, SM-s in Armenia have passed through noteworthy developments. At first, the sphere of their activities broadened, covering other fields of social life, among them the successfully conducted campaign against the raising of public transport fares [10] and a number of civic protests against Armenia’s joining to Customs Union [11]. And, more importantly, activist discourse also underwent a notable change whereby the idea that the solutions to most of the problems being addressed could be found in the political field. This important transformation served as a basis for cooperation between political parties and the newly established movement against the controversial law on the national pension system [12].

To conclude, SM-s in Armenia have mostly been of a reformative character. Starting in the ecological domain, they evolved to also cover labour rights and other issues and are showing signs of moving into the struggle for political rights. They face a number of countermeasures taken by state authorities, including persecution of certain activists, limitations of freedom of assembly and detentions.

Social movements in Azerbaijan were found at approximately the same time: the oldest and most prominent of which, Ol! was established in 2006 and is a sustainable organism mostly engaged in alternative civic education [13], trainings for civic activists [14] etc. Another movement focused on the defence of the constitutional and human rights of Azerbaijani society is N!DA [15] which is also engaged in promoting youth involvement in socio-political processes of the country. Unfortunately, Azerbaijani SM-s’ coefficient of efficiency is limited due to being objects of constant persecution by state institutions, which are believed to include arrests on false accusations, execution of various pressures etc. which are prone to intensify, especially in post-electoral periods [16].

In fact, Azerbaijani SM’s have revolutionary visions and are mainly addressing preservation of political rights. They are also under constant threat of severe measures, which can be taken by the government at virtually any time.

The history of civic movements in Georgia starts in the early 2000s and is usually tied with the Rose Revolution in 2003, a peaceful change of power, initiated by a number of activists and active citizens of Georgia (most notably Kmara! [17]). It’s quite symptomatic that for a remarkable period social movements were mainly seen as extra tools in Georgian politics (i.e. Salome Zurabishvili Movement, named after its founder, former foreign minister Salome Zurabishvili in 2005 [18], or Defend Georgia!, founded by Levan Gachechiladze, a former presidential candidate in Georgia [19]) which also disseminated seeds of mistrust towards political powers among activists. It took quite a while before social movements began to be used for purposes not entirely political/partisan in nature. The main civic “event” became the widespread public resistance against a capital construction in one of the central parks in Tbilisi, Vake Park, where a hotel was intended to be built with the permission of City Hall [20]. The struggle against the city municipality, which is the main addressee of the problem, is still underway. Besides the Vake issue, several other environmental initiatives have been launched recently, among them the protest against gold mining near a historic site [21].

All in all, the ontology of Georgian SM-s can be characterized as a transformation from the Revolutionary model into a Reformative one, which also had a corresponding impact on the change of their areas of activities, moving from the political field into an ecological one. In comparison with the situation in Azerbaijan, the state’s reaction has been considerably modest and limited.

Unlike the mentioned cases, there are several divisions on SM-s in Turkey. For instance, several researchers find it unclear whether to consider the Gulen Movement a social one or not. The same applies to other non-partisan initiatives of an Islamic origin. In general, politics in its apparent and hidden forms, religion and social movements are so closely intertwined with each other that unwinding the knot is sometimes too difficult a task for the researcher. Although there are cases which leave no space for concerns; and the Gezi Park struggle is one of them. Starting as a protest against construction plans of the city municipality, the movement quickly transformed its demands into political ones [22]. The Gezi case shows up how the excessive use of force by state institutions (the police, above all) can absolutely change the “face” of the problem and result in a lingering domestic crisis which shows no signs of a forthcoming solution.

Gezi Park is a reverse example of the Georgian SM experience, here an initially Reformative and ecological movement has transformed into a Revolutionary one that already pursues political aims.

The analysis and classification of SM-s in South Caucasus states brings us to the following conclusions and recommendations:

a) Most of the countries have passed through the experience of reformative movements (usually focusing on environmental issues but not limited to them)
b) Most of the movements of reformative character usually face similar challenges and obstacles as represented by local municipalities (more rarely by central authorities), law enforcement state institutions etc.
c) The current situation and its extrapolation in the near future leave virtually no place for doubts that revolutionary movements will most probably be frequent guests in the region with their typical peculiarities and arsenal.
d) The activist circles in all of the countries are quite prepared to make their first regional steps by expressing their solidarity towards the civic processes happening across borders [23].
e) The time has arrived to give a new impetus to organizing a variety of regional events (workshops, conferences, camps, summer schools) designed particularly for social activists, where it will be possible to exchange experiences, to learn from others and to attempt to look at social changes from a regional perspective.