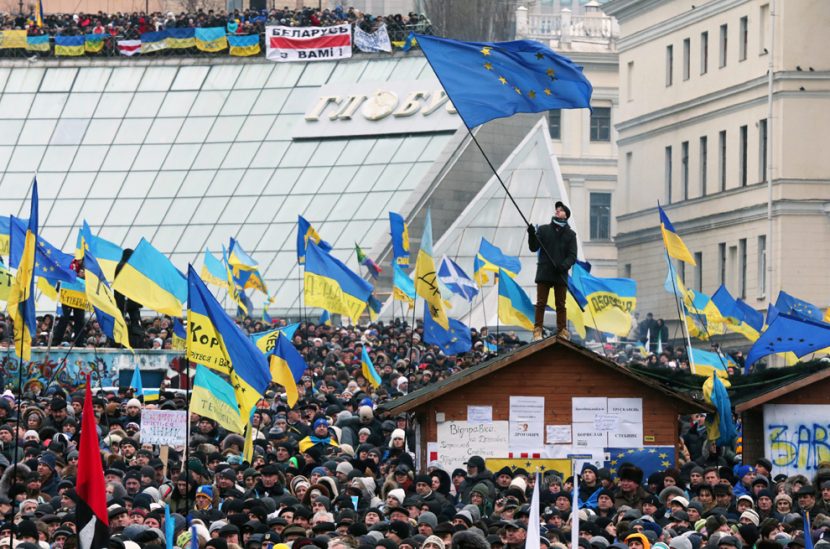 Strengthening of civil society in Ukraine: societal mobilization towards democratization

Euromaidan or the Revolution of Dignity was seen by many in Ukraine as a “birth” or “rebirth” of the Ukrainian civil society. It was argued that the most prominent feature of the revolution was an emergence of the new society based on the values of democracy, dignity, political and human rights and individual civic responsibility (Stepanenko, p.43). Four years after the Revolution we are witnessing the general dissatisfaction and disappointment with the current state of affairs – promised reforms were not realized, some realized ineffectively or too slowly. At the same time, civil society seems to lack necessary leverages of pressure on the government to perform changes and reforms. It raises the question, does the mass mobilizations and successful revolutions mean the presence of a strong civil society? Another point for reflection is the role of the civil society during the protests and aftermath. Does the Ukrainian civil society serve as a bridge between people and government or the only form of a serious pressure appears to be spontaneous popular mobilization and a mass protest? This paper attempts to answer these questions in the sections to follow.

To start with, the dominant concept of the civil society is built around the Tocquevillian idea of freedom of association (Foley & Edwards, 1996). When there are many definitions of civil society, we may refer to Keane’s (1988) conception which as emphasized by Fish (1991) makes an important distinction between state and society:
Civil society may be conceived of as an aggregate of institutions whose members are engaged primarily in a complex of non-state activities – economic and cultural production, household life and voluntary associations – and who in this way preserve and transform their identity by exercising all sorts of pressures or controls upon state institutions … [its] units … are legally guaranteed and self-organizing. (Keane, 1988, p. 14)

The importance of civil society for strengthening and consolidating democracy has been emphasized in a number of studies by many scholars around the world. Civil society is deemed to perform the watchdog functions over government activities, promote political participation, build trust among citizens, educate, and to ensure that democratic norms are upheld (Burlyuk, Shapovalova, & Zarembo, 2018). The special attention of scholars has been given to the role of civil society in the democratization process in the post-communist Central and Eastern Europe. Civil society in this region was mostly defined as weak and civic engagement was not a frequent phenomenon in comparison to the situation in Western Europe (Howard, 2002; Kostelka, 2014).

Ukrainian case was not the exception – institutional framework of Ukraine remained a legacy of the Soviet past, as well as the structure and the purpose of civil society (Cleary, 2016). Although civil society organizations existed during Soviet times they were monitored by the state. The low level of participation in civil society organizations in Ukraine could be described by what Howard (2002) calls as three common elements of people past experience: the legacy of mistrust in state-controlled organizations, the persistence of family and informal friendship networks, and general disappointment with political and economic transition after the fall of the Soviet Union (p. 161).

Not so distant events of Euromaidan in 2013-2014 demonstrated unprecedented level of public self-mobilization and volunteerism in Ukraine. Thousands of volunteers and millions of “ordinary citizens” were mobilized to support new civic initiatives and in many cases even took over the functions of the weak state (Burlyuk et al., 2018). The speed and level of engagement challenged the common assumption about the weak civil society in Ukraine.

Nevertheless, it was not the first time of such a rapid civil society mobilization happening in Ukraine. During the past 26 years of independence, Ukraine has faced few examples of powerful and spontaneous mass mobilization. The strikes of miners in Eastern Ukraine in 1993 that led to the President early-election, Orange Revolution in 2004 similarly to the Euromaidan were promising significant changes in the country. Yet, events of 1993 and 2004 did not much change the situation in the country, rising sheer skepticism where Ukrainian civil society is capable “to finish a revolution” (Lutsevych, 2013, p. 1). The aftermaths of these demonstrations raised the question: whether Ukrainian civil society is capable to go beyond spontaneous gathering on the squares and mass protest? Does it able to create sustainable institutional forms to control and, in crucial moments, put pressure on government to perform promised by revolution reforms?
Lucan Way (2014) suggests that “it is wrong to assume that successful actions by protesters or even civil society representatives necessarily reflect a powerful or “emerging” civil society” (p. 41) . Euromaidan was seen by many as a proof of existing or emerging civil society in Ukraine. Yet, it had spontaneous character and relied on individual citizens rather than on preexisting organizations. As Way concludes, the civil society in Ukraine is a dispatcher of protesters, but is not able to “give shape, focus, and a voice to demonstrations” (p. 41).
What is important is that comparing to the previous cases of spontaneous mobilization, Dignity Revolution in 2013 seems to be different as people appeared to be much more active and they maintain to pressure government for reforms. Yet, they still face many challenges. Similarly like in the cases before, people in Ukraine cannot rely on strong civil institutions, but rather on acts of individuals. The survey of Democratic Initiatives demonstrated, that people were mostly coming to the main square on their own or in small groups – 75 to 92 percent responded that they had come themselves or with friends or family (Way, 2014, p.40). This may also mean that likewise to Orange Revolution, civil society in the Euromaidan protests played more a role of “a traffic cop (orchestrator of protest)” (Way, 2014, p. 39) than a “dispatcher (originator of protest)” (p. 39). This is to say, that the main role of civil society was rather to facilitate protests once they had started rather than bring people into streets, communicate any significant idea and mobilize them into active and meaningful forms.

It seems like civil society in Ukraine struggles to identify its main role – instead of putting the pressure on government to fulfil its duties, it takes over the responsibilities of the government. Having a low level or no trust to the state institution, civil society organizations act without a state or despite the state. The volunteer movement on the East of Ukraine helped injured soldiers, filled the gap of basic provision when the state was too weak (Burlyuk et al., 2018). The volunteer movement delegated their former responsibilities when the state raised in its powers to provide needed help, however volunteer services in many cases were more effective than the state ones. As Burlyuk and colleagues mention, this resulted that military corps preferred to rely on volunteer help rather than government commitments before army. The willingness to contribute, to make a difference to Ukraine, is evident in range of areas: volunteering, grassroot activism. However, this results in what Cleary (2016) calls a “pseudo-plenipotentiaries, creating a hybrid civil society” (p. 14).

What does Ukraine have to rely on for now? Susan Worschech (2017) states that although Ukrainian civil society was characterized by “high mobilization and low institutionalization” (as cited in Burlyuk et al., 2018, p. 14) it has adjusted to new demands and managed to build and broaden trust to a new level. Worschech notes that democratic socialization appears to be the primary mode of work for the civil society in Ukraine, but the control over government’s performance is the function which Ukrainian civil society cannot manage for now, especially in the face of long-lasting economic crisis.

At this point, summarizing main points raised in this paper we have a generative picture of Ukrainian civil society – in general weak, usually individual-driven, as a whole, under the impact of the Soviet-legacy, taking the functions of government instead of forcing the government to perform. In my position, even if the picture is not that bright, there are certain signs of progress in many directions. To start with, civil mobilization took place and it is clear evidence that people care about their living and ready to act to change something. Whether it is volunteering or grassroots activism, these agents of change work to satisfy the basic needs of people when the government cannot take over with their responsibilities. It is important to understand that civil society functions in the major economic crisis in the country, which per se shifts the attention to the most pressing problems. This is not to say that Ukrainian civil activism should not account for government performance, this is rather to understand that the history of relationship between an activist and the state is a case of the post-Soviet influence, country where people perceive the state and its interests as something distinct and different from them.

In line with the title of this paper, one can reasonably ask: but what should Ukrainian civil society do? Based on the reviewed literature and some analysis there may be a set of following implications:
• First, the key for growth of civil society is in its awareness, educational potential, ability to understand the essence of their activities and learn how to increase the magnitude of change caused by their actions;
• It also means that civil organizations should understand their responsibility as a part of what constitutes well-functioning civil society. It implies that on a possible for them scale they should interact with the state, inspect and demand for action;
• Connecting to the previous point, when the relationship with the state appears to be challenging one, there may be additional pressure levers to make things work. Especially when they are made public and involve a larger amount of people to track the progress of initiative. The math is simple – when more people know about initiative, it is harder to neglect its demands;
• The civil society is by definition a network, which means that there should be connection and cooperation between various stakeholders. For instance, as Greenpeace suggests, if you advocate for healthy food you can turn for the support of related to your activities group – in Greenpeace’s case “Make Climate Activists Food Activists” (“12 Things You Can Do To Start An Eco-Food Revolution,” n.d., para. 15) and vice versa.

Concluding, it appears that hybrid civil society of Ukraine needs to have some deep thought over its performance, nature and goals. When the level of public involvement in Ukraine has significantly risen since Euromaidan, it is still an open question whether civil society is capable to significantly influence democratic change in the country. Ukrainian civil society should definitely find its way to grow into a sustainable network of change.

The article was written in the frames of the project “Black Sea – Eastern Europe Dialogue – Youth for Sustainable Peace” funded by The Robert Bosch Stiftung (RBSG) and the Black Sea Trust for Regional Cooperation of The German Marshall Fund of the United States (BST). The content of this article is the sole responsibility of the author and can under no circumstances be regarded as reflecting the position of Caucasian House, Center for European Neighborhood Studies, RBSG and BST.