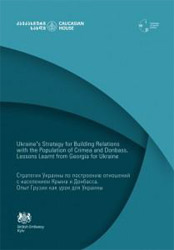 Ukraine’s Strategy for Building Relations with the Population of Crimea and Donbass. Lessons Learnt from Georgia for Ukraine